Change and Rest in Peace @colmmu

They say a change is as good as a rest, I'm trying a little of both at the moment. Resting up in Norway after a knackering couple of months and changing numerous things, starting with the Twitter handle.

It's a weird feeling changing the name you have been known as in an online community. It shouldn't feel strange but it does. I've wanted to change for a while as the idea behind the original moniker is no longer fitting, colmmu was originally my secondary account on Twitter, it was going to be my "professional" identity and thus colmmu stood for College Of Law Multi Media Unit, which is where I worked. Unoriginal, boring and trite - which was the intention of that account. I had another account where I was more myself, but I'm not one for split personalities and running two accounts in different personas was impossible for me and I started being more myself with colmmu than the other account, so I deleted it and kept going.

Over time it bothered me that the handle was a reference to my job, one that I often had to explain to people. When the College became a University, it became even more redundant and I wanted to really claim it all back for myself. After all it was not an official account in the slightest.

So, why kaoticoddchild? It has history with me, I'm chaotic, sometimes odd and try to maintain a strong essence of childhood wonderment at the world. Oddchild is also how everyone misreads my wife's name, which has always amused me.

Letting go of colmmu is just the beginning of a process, I'm gearing up for lots more change because I have a deep fire burning in my soul to shake a few things up in this world. More on this later... the first step is letting go and I'm am reminded of an excellent text extract by Richard Bach:


Once there lived a village of creatures along the bottom of a great crystal river. The current of the river swept silently over them all -- young and old, rich and poor, good and evil -- the current going its own way, knowing only its own crystal self.
Each creature in its own manner clung tightly to the twigs and rocks of the river bottom, for clinging was their way of life, and resisting the current was what each had learned from birth.
But one creature said at last, "I am tired of clinging. Though I cannot see it with my eyes, I trust that the current knows where it is going. I shall let go, and let it take me where it will. Clinging, I shall die of boredom."
The other creatures laughed and said, "Fool! Let go, and that current you worship will throw you tumbled and smashed against the rocks, and you will die quicker than boredom!"
But the one heeded them not, and taking a breath did let go, and at once was tumbled and smashed by the current across the rocks.


Yet in time, as the creature refused to cling again, the current lifted him free from the bottom, and he was bruised and hurt no more. 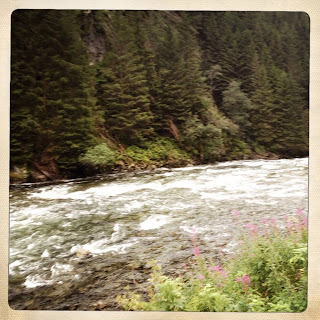 Posted by KaoticOddchild at 7:02 PM No comments: