I thought that I would write a blog post this week for #FF rather than the usual obligatory visual media.

The main theme of the creative #FF idea was to try out different creative ways to send out a #FF message. Therefore each week I find myself trying to think of different ways to do a #FF message, I seldom have a problem inventing wild and outlandish ways to do this, but am soon brought down to earth with a resounding thump as I acknowledge the limited time I actually have to do anything.

This is one of the problems with creativity, it has to be imagination put into action and we seldom allow ourselves the time to a) have the space for imagination or b) have the time to actually do anything about it. So we fall into a formulaic "what already works" mindset, I fell into this trap with the success of the Star Wars video, it's a simple tool called Jib Jab to make them and thus very easy for me to do it - people liked it, therefore more of the same. Television falls into this trap all the time hence the constant TV format derivatives you see on the screen all the time. Hollywood is in this trap at the moment with re-makes, simply re-package what has gone before.

We make the same mistake in education too, we keep re-packaging and re-formatting a model from an era that has transpired and we need an overhaul. The danger is due to a severe lack of nurturing creativity in education for some time now we've disconnected with how to do it and confused the concept with artistry too much ie To be creative, one must be an artist.

I think I was probably born with an overactive imagination, because as long as I can remember I have been a consistent daydreamer looking for outlets to turn these thoughts and ideas into something, one of my earliest memories of school is taking an old wind-up 8mm film camera to school and in playtime getting my peers (I was about 6) to act an entire film under my direction with the camera (which had no film in it I hasten to add) over an entire week (an eternity as a child), it was an epic and I'm not sure how I managed expectations as these child actors then awaited the world premiere which could only ever be screened in my head. Throughout school I never harnessed a way to turn this imagination into creativity, ie applied to output. As I recall it was often frowned upon. My staging of a school production of A Midsummer Night's Dream as a gothic fairytale that Tim Burton would have been proud of (yes with a full fairy battle led by Puck, played by large female goth) did not meet with favour from my purist English teacher (I was 15 then) or my Hamlet as Wall Street boardroom (when I was 16). 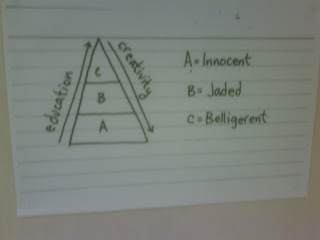 It wasn't until I went to University I finally learnt (and it was encouraged) the frameworks of how to turn imagination into creativity and had to undo all the trappings of prior education to absorb this.

With this in mind, I reflect on the idea that I often hear from lawyers about "how they are not creative" and think back to the UCL debate recently on the future of legal education. I found the debate interesting in the fact their was much debate over "what" should be taught or educated, rather than "how". The moment I found most interesting was when Prof. Philippe Sands stated he "regretted studying law" because it narrowed the mind and in itself legal education could not encourage divergent thought. This I believe probably says more about his education rather (and indeed maybe the problem with current legal education) than the possibilities for creativity in legal education.

As W.B Yeats said "Education is not the filling of a pail, but the igniting of a fire", we should be looking at creative ways to ignite that fire, rather than filling the pail with information and knowledge for our future lawyers and society at large for public legal education.

Whilst not a lawyer myself, I believe law is a creative arena, in fact it is one of the key frameworks in society that can enable it, turning imagination into something that can grow, evolve, expand etc. Lawyers have to be creative in how they run their industry, how they engage with clients and how they resolve disputes amongst many other areas.

The image of law and all of it's permutations often has a perception problem for the uninitiated as rather old fashioned and reserved, it's a perception that many in the industry perpetuate by self harming statements about their lack of creativity or conservatism. It also translates in the way we educate and teach the law often, as if it is a dry subject or historical rather than a living breathing amazing power. I think we need to start thinking more creatively about how we educate and need to start thinking about enabling more creativity and divergent thought in our students about how to evolve the legal industry in an ever complex world.

Sometimes I meet people who say "Jon, you come from the entertainment business, education should not be entertaining - it should be hard"

I simply point them to Marshall McLuhan's words painted across my office wall: 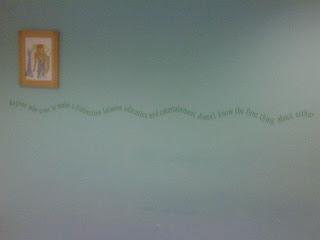 So please take some time out to listen to Sir Ken Robinson's passionate speech about the importance of creativity in education and think about how we as an industry and as educators can embed creativity into our futures.

As for future #FF creative posts, I'm going to take away the pressure of trying to find a method each week, but do it when the right mood and idea takes me so as to avoid a formulaic approach.

Posted by KaoticOddchild at 1:36 PM