Brick Dust on the Forehead

There is something deeply liberating about not being affiliated to one specific organisation, it gives you the freedom to be more, well, yourself really. This is of course fairly ludicrous, shouldn't you always be you? But there is something about organisations, institutions and industries that just seems to stifle who we really are and I think it's mainly about becoming compliant. Seth Godin covers this very neatly in The Icarus Deception. So why am I thinking about this? Because I know that this compliance training starts in education and enough is enough.

I attended a conference about Legal Innovation and Legal Education this week, well I say attend, I followed the #innovatelaw tag on Twitter from my fireside here in Norway - but you catch the drift.

It was all reasonably polite and the debate was sincere etc, but there just came a point when I had that moment of clarity: 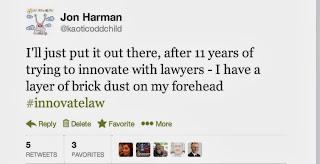 I've listened endlessly, read endlessly and talked endlessly about innovation and education in law and I'm bored with it. Not bored because I don't care or don't think that there are endless possibilities, I'm just bored because so little happens. When I first came into the industry there was talk of the Training Framework Review which went on endlessly ad infinitum with very little happening, the LETR showed more promise, but as that went through the very wide and transparent debate around the country (kudos to the team on how open and transparent they were) I still had to listen to a lot of people from industry, regulators etc pontificate about legal education and then demonstrate they knew very little about learning, they were simply interested in maintaining the machine of compliance that exists and curating a museum of how it was. The Bar Standards Board were by far the worst offenders I saw of this. So often at these debates or discussions, I saw the voice of the student drowned out or not represented. I have sat in meetings and listened to colleagues talk about rigour and brightness required, yet know nothing about brain cognition, multiple intelligences or divergent and convergent thought.

I have attended numerous "future law" talks and conferences where the usual suspects like Richard Susskind regurgitate Kurzweil's singularity for lawyers and when he's not available they actually get Ray in to talk about The Singularity, which I'm sure was really helpful and pragmatic to the lawyers in the audience. I've been to a talk by a barrister explaining to me "The Cloud" and how they've moved all their documents to Ipads via the cloud (essentially they had discovered Dropbox) and it all scares me. It scares me because I know you're better than that. I know you can be innovative and creative, it's an innate human characteristic.

Before we go to that though, I've got to just say this talking and chin stroking has just got to stop. If we're going to change or innovate let's at least throw off the shackles of what is stopping us. I want to follow Howard Beale's example and just shout "I'm Mad As Hell and I'm Not Going to Take It Any More!"

Does that feel better? Okay. So we need to accept that if we're going to get anywhere we have to stop fixating on the "i" word,  the more you use that word the less likely you are to actually do it. We need to go back to basics and think "play" which means a bit of de-programming how you've been educated. 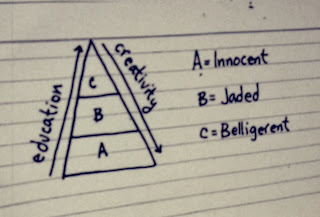 Now nobody is going to set up a Legal Education Council, with a nice committee etc so we may as well stop debating that now. Sure we can go and ask for some money from The Legal Education Foundation and we should (they have £200million somewhere). But as Jobs said "No-one is going to give you permission to put a dent in the Universe, you just have to do it".

So why not just set up a brain trust of people that want to do this, play, prototype, gamestorm it, hack it and try some solutions - we know the problem domain, it's time to move onto building solutions.

Guess what in the 11 years since I first heard all this debate starting, the world has invented some really cool tools for collaboration virtually, thus making it less onerous for people to create movements. We don't need any committee halls or lecture theatres, let's use Google Docs, Basecamp, Voicethread, Hangouts etc, etc.

I know revolutionary talk and all that is very zeitgeist at the moment, and that is not the reason I raise this - it is because our futures and our kids futures need this, we need to start solving some of the great big problems on the way - that needs law, but it's going to need a much more agile, creative, inventive, collaborative bunch of lawyers and legal services to deliver it. So we have to start now with legal ed to get ready. Time to break down that dusty brick wall that has been giving me a headache for too long.


The Backchannel Comments
Posted by KaoticOddchild at 1:51 PM