Snapshots. That's what you remember. Little mental polaroids or flash frames of what happened. Hardwired into your memory but disconnected somehow from the bigger picture. Little jigsaw pieces that don't come together easily. A fractured mirror that distorts the reality somehow. Little fragments, shattered, exploded, sprayed.

6th July 2005. Have spent the day looking at and thinking about enhancements to our elearning packages with a Professor from Strathclyde University. We get on well and don't get to cover everything we want to discuss. Later that evening he calls me to ask if I can meet him at Euston before he makes the long commute home to Glasgow. Sure I think, what's a small diversion first thing in the morning, how can this have any impact on my day. I can accommodate it. 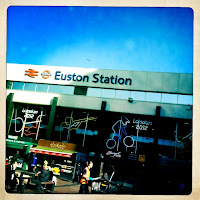 7th July 2005. I say goodbye to my mum and our new live-in nanny who has just arrived from Norway to look after our 2 year old son, she's nervous being in a new big city. It's okay as my mum is here to settle her in. I'm leaving a bit earlier than my wife who is going to a training event in central London, but we're travelling different ways. We would normally travel together on the Piccadilly line into Holborn, but today we've both been diverted to our different destinations because of fate. 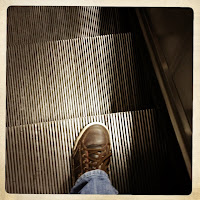 I arrive at Euston station, the tube pulls into the platform. As I walk to the escalator, something seems wrong, people seem eager to get out because there has been a power surge and the escalators are not working, there are more tube workers milling around than usual. Little flashes of fluorescent jackets. Looking down at the non-moving escalator, the metal grooves in the steps. Quickly some trainers fill the frame and I look up to see two young men running fast down the escalator as if escaping something. I remember baseball caps on their heads, but nothing else. It was only peculiar because it was so out step with the rest of the atmosphere. 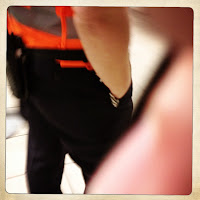 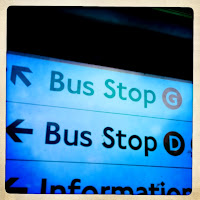 I'm out of Euston and meeting my Professor friend for coffee, this must be around 9am and we chat for some time about the project we are working on. Then more fluorescent jackets, this time ushering us out of the station. They look scared, this is not a drill I remember thinking, the power surge, the metal grooves - it all connects. 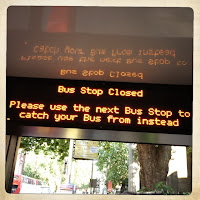 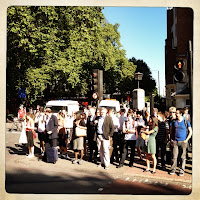 We step just outside Euston, but the barrier of fluorescent jackets pushes the crowd further and further out and as we step further out the volume of sirens increases, a cacophony of ambulance, police and fire. But they're not coming here. They're going somewhere else. Here is safe compared to where they are going, but the faces appended to the jackets are saying this may not be true for long. 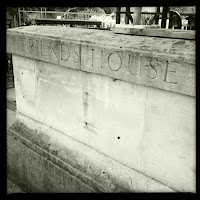 My Professor colleague suggests we get to my office on some other form of transport, I see the wave of people heading to the buses. No chance I say, let's find another place to have coffee whilst this calms down and we cross the road to the Quakers meeting house. Lots of people get on buses as they move away from Euston.

Within seconds there is a loud crack, not a bang but a crack through the atmospherical noise. It's all out of vision but there is smoke or dust or something rising just above the buildings and trees. Then it starts, one by one the walking wounded or slightly injured are walking towards us.
A young lady violently shaking is the first to us, people crowd her to find out what is happening. I can see she is in shock and get a cup of tea, she needs sugar. I remember nothing of what she said as explanation, I just remember the pain in her eyes, the strained tears and having no idea what had just happened. 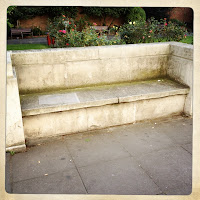 More walking wounded, more blood stained people, too many people coming to look at what had happened rather than helping, breathing, calming.

All phones were down, no chance of telling anyone or connecting with anyone as to what had happened, were my family okay, did they know I was okay?

Something told me to get to the office, make sure people were okay and it would be a better place to communicate from. Professor and I parted company, somehow we did not know the enormity of what was happening and this seemed rational. I headed off, to weave my way to work, not realising, not contemplating that what I was about to see would be etched on my brain for some time. 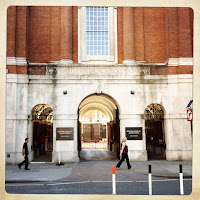 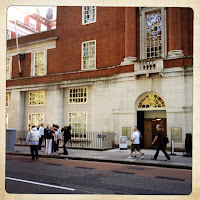 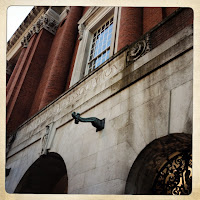 I rounded the corner into Tavistock Square. The front of the BMA building. Sprayed with matter. I thought it was moss, a dark red burnt moss. Lots of twisted metal and shards of things. Lots of bits. Bits of people. Bits and pieces scattered across the floor and on top of cars and sprayed up the walls. More fluorescent jackets, pushing back, pushing away...but too late...the image is there...the sight is there....the memory hangs there forever. I can not walk through that area with out those images being superimposed over the now tranquil scenery. Cannot do it. Even deep breaths can't help it.

Walking away, moving away, not sure where I'm going. Armies of us now, meandering like zombies looking for the mall. London confused. London scared. 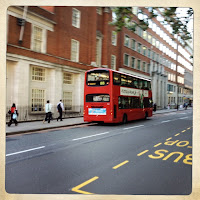 Bang! The entire army drops to the ground, me too. My face on the cold concrete with small traces of weeds springing through the cracks. Is this it?

"Sorry" says the builder who just threw a lot of bricks into a skip from a great height. Relief at surreal moments. A momentary smile amongst the chaos. More walking.

Eventually got to the office and locked things down and ensured people were safe, but locked away those snapshots, those memories. Family were safe, we were safe. Relief.

But 52 people weren't, 52 people and countless more saw worse, experienced worse than I did. Just little snapshots that are polaroids on my mind. 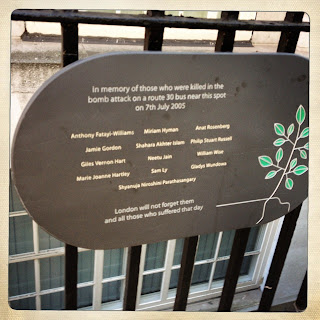 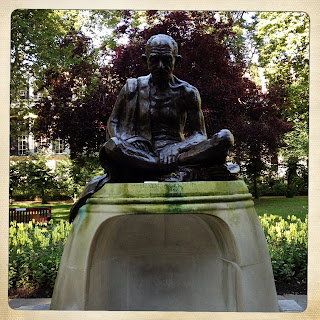 Posted by KaoticOddchild at 1:12 PM