Wow. The energy during and the responses after #lawtechcamplondon have been amazing. It’s been fascinating looking at the memes and backchannels that have emanated from this event. I haven’t seen this from a legal event before, which is exactly the outcome we wanted back when the idea was being kicked around. I say we, I have been more of a passenger than an architect, but let me explain a little background to my involvement in the formation and give the real credit where credit is due because I felt guilty about those that came up to me on the day as if it were my brainchild and I definitely can’t take that credit, I helped get people there and interested, but let me explain....

Over a year ago I stumbled onto the concept of Law Without Walls that was being put together at University of Miami – as a learning technologist and techy geek working in legal education it piqued my interest and tied into many of the emergent theories I was exploring within my own organisation as seen here (whilst stats have changed, the message remains the same):


Did You Know? Legal Education from Jon Harman on Vimeo.

A quick Google search opened an e-mail exchange with Michelle Beardslee Stefano, the co-founder of Law Without Walls, and soon we were Skype chatting about law, learning and technology – along the lines (though less eloquently) of THAT VIDEO by her colleague Michael Bossone. It’s safe to say we found a kindred spirit in our passions for doing things differently and a desire to open the eyes of others, widen the choir and sing as hard as our lungs would allow.

Shortly thereafter I was introduced to Monica Goyal, founder of My Legal Briefcase in Canada, who had just started Law Tech Camp in Toronto and was keen to bring it to the UK, Michelle made the introductions and before we knew it we were Skyping and discussing how LawTechCampLondon could happen. We had very grandiose ideas to say the least and my overactive imagination threw around ideas for gamestorming, hackathons, cross collaboration between innovator hubs and legal communities, merge the worlds of start-ups, investors, legal innovators and students.

I recall a 2 day event across different locations that would have been an epic and killed all of us. It would have scared the hell out of many attendees possibly and been too much, too soon. Whilst Michael says PUSH, I say PULL and you can’t pull someone into your trajectory and get engagement unless you game it right, you have to level up following Czikszentmihalyi Theory of Flow 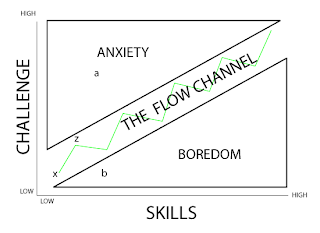 That said we had a connection and a passion for doing something different and were adamant it had to be unlike many of the staid legal conferences that were the norm in the UK and most importantly it had to be divergent in approach. Open up opportunity for individuals to pitch talks for the event, no exorbitant entrance fees and no exhibitor pitches. It had to ignite a fire.

The danger of being interested in so many things means you often overstretch yourself, I fall into this trap often. At the time I was working a 50hr week, doing a 3hr commute a day and studying an MA on top, I found the time I had to help pull together a law event was becoming difficult and fitting in the necessary time for mapping out was hard. At the same time Monica’s friends at Michigan State University – Dan Katz and Renee Knake Newman, were planning 21st Century Law Practice Summer School with University of Westminster and thus it became natural for the first LawTechCampLondon to take place as the summation of that course.

I took a backstep due to work commitments but involved my colleague David Allison with whom I had been discussing ideas for UK #tweetinglegals events. David stepped to the fore and became the driver from the College of Law end which enabled me to discuss with him and respond to ideas without the time pressure of Skype meetings. It was soon settled that we would focus on providing an ecosystem around the event, use our networks to spread the word locally and try to pull local speakers, encourage talk submissions and provide facilities for capturing the event on video. Ideally we would have live streamed the event as we have the capability to do so, unfortunately due to the timing of the event didn’t have the full resources available to commit on that day – but we’ll work on that for next time. We did discuss planting various people in the audience to go lo-tech and stream live from iPhones using Bambuser – just one of the many ideas that got lost in the big push to pull this off. The videos should be available in mid July and will be PUSHED out into the network accordingly. I will pull together a list of data and blogs etc already published soon.

So that was now and a great first step, but what next? The appetite feels right for another and I am sure from reading the tweets and blog posts, many of you have great ideas for a bigger and bolder second camp. Maybe there should be a discussion group online to discuss what would fit well in the next one, let’s crowdsource this even more. Any ideas on how best to do this, put them in the comments box below!

For me there are a few things I would like to explore more. We talk a lot about how technology is changing the law or legal services, let’s talk about how law should be affecting technology. Why do I say this? There are some very big issues on the horizon for ethics and justice relating to technology and we run the risk of the law not keeping up. We’re struggling in forming legislation correctly to align with IP, Privacy, identity and libel already. What happens when we have the "Internet of Things" and more importantly when technology and humanity start to converge, how are we going to legislate for post humanism?

I want us to explore changes in legal education to cater for this world and to actually cater to how we know brain chemistry works, I want to see better debate about learning for legal practice that takes into account new learning methods that both involve technology and innovative practices – spaced learning anyone? Situational simulated active learning anyone? Game based learning anyone? MOOCS anyone? Bueller? Bueller?

I want to see a legal hackathon that brings developers and lawyers together to work stuff out and hell why not bring some clients into the mix too! As Jon Busby suggested, do that and I’ll bring the pizza. Let’s mock things up and solve some problems, if kids are doing it so can you – think of the apps we could create with that new open data from National Archives for instance, but there’s so much more.
Let’s think better at what we could do with public legal education and tools that could engage the public more in justice at a time when public justice is under pressure, now is a great time to zig whilst others are zagging. Let’s not waste time lamenting what we are losing, let’s come up with some solutions. Build our future instead of accepting our fate.

Lastly I want to have a deeper debate about predictive algorithms and quants, it’s important that we do if we want to get it right for law. Economics will likely drive it to the logical conclusion, but we must ensure not to make some of the mistakes that other industries have done with predictive data. There was a stock market crash that still doesn’t know what went wrong with the algorithm. What would the legal equivalent be? Let’s look at informorphs or Weavrs, let’s look at how your social data may continue to live on beyond you with a life of it’s own, let’s look at what other industries are doing it too.

We are not a bubble, we are not a beautiful and unique snowflake – let’s widen the net and explore collaboratively, let’s embrace connectivism and continue the dialogue with lawtechcamp becoming to law what Burning Man was to Google. Innovation needs to be an agricultural process, let’s not debate which department is responsible for structuring it, let’s create an environment for it to grow.

Have you connected with others? Are you widening the choir? Are you practicing your singing and picking up the mic ready to go on that stage that is Twitter, Linkedin, Skype et al? Prep your Pecha Kucha because I’m looking forward to next time.... Until then follow the #reinventlaw hashtag on Twitter and think about the network:


Network from Michael Rigley on Vimeo.
Posted by KaoticOddchild at 11:16 PM